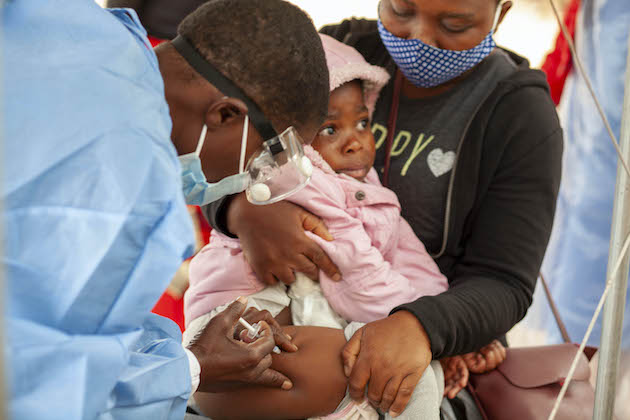 Blantyre, Malawi, Apr 18 (IPS) – One polio case is one too many, global health experts say.

And when Malawi announced in February this year that it had detected a polio case in the country’s capital Lilongwe, the alarm was significant, and the response from both the government and global health partners was swift, if not frantic.

Detected on a 3-year-old child, the poliovirus is described by experts as a significant public health concern for several reasons.

According to the World Health Organization (WHO), polio has no cure, and it is a highly infectious disease.

“It invades the nervous system and can cause total paralysis within hours,” said WHO in a statement released on February 17, 2022, upon the Malawi Government’s announcement of the outbreak.

Furthermore, Malawi has not registered any cases of polio in 30 years. The country last reported a case of polio virus in 1992.

In 2005, Malawi obtained a polio-free status.

In addition, according to the United Nations health body, Africa was declared free of indigenous wild polio in August 2020 after eliminating all forms of wild polio.

To date, says WHO, polio remains endemic in Afghanistan and Pakistan, and laboratory test results on the case in Malawi showed that the strain was linked to the one found in Pakistan’s Sindh Province.

“As long as wild polio exists anywhere in the world, all countries remain at risk of importation of the virus,” Dr Matshidiso Moeti, WHO Regional Director for Africa, said upon the announcement.

Immediately after the outbreak, the government declared a Public Health Emergency.

It also instituted risk assessment and surveillance measures to contain any potential spread of the virus – but it assured that there was no evidence that the poliovirus was circulating in the community. There are no reports of additional cases of polio thus far.

Within 72 hours, the Global Polio Eradication Initiative (GPEI) Rapid Response Team arrived in the country to support the outbreak response.

These efforts were followed by a mass vaccination campaign, the first of four rounds, targeting 2.9 million children under five.

UNICEF had partnered with WHO and the Global Polio Eradication Initiative’s Gavi, Bill and Melinda Gates Foundation, Rotary and Centers for Disease Control and Prevention in supporting the Ministry of Health to vaccinate children in four mass campaigns.

A Poliovirus Outbreak Response Situation Report released by the government on April 4 says 2.97 million children aged between 0 – and 59 months had been vaccinated in the campaign, representing 102 percent administrative coverage.

The Ministry of Health says it is delighted with the campaign’s success.

“We attribute this to the dedicated workforce, the door-to-door approach and low presence of misconceptions, misinformation and disinformation surrounding polio vaccine,” the ministry’s spokesperson, Adrian Chikumbe, told IPS.

But the campaign was affected by some challenges, the Ministry of Health acknowledges in the vaccination campaign review report.

Malawi is reeling from the impacts of cyclones Ana and Gome, which hit the country in January this year, leading to flooding in many parts of the country and displacement of close to a million people. According to the report, the dispersion of the communities due to flooding increased the workload for vaccination teams.

“Polio campaigns with house-to-house strategy have not been conducted in-country in more than ten years, resulting in house-to-house vaccination not being strictly being followed in some areas. Grassroot social mobilization was also delayed in some communities,” adds the report.

The second phase of the polio vaccination campaign is slated for late April.

“We urge all of us to sustain the gains in the first round of the campaign by making sure no eligible child is left behind in the subsequent rounds of the campaign. That way, our children will be adequately protected against polio which leads to paralysis or even death,” says Chikumbe.

UNICEF says the re-emergence of the wild poliovirus in Malawi, three decades after it was last detected, is “cause for serious concern”.

“Vaccination is the only way to protect the children of Malawi from this crippling disease which is highly infectious,” says UNICEF representative in Malawi, Rudolf Schwenk.

According to UNICEF, as an epidemic-prone, highly contagious disease, polio can spread easily through the movement of people from endemic to polio-free areas.

Community health activist Maziko Matemba tells IPS that one case of polio is one too many because of the high rate of spread of the virus and the severity of its effects.

“You need a rapid response to forestall its spread. You may not manage it if it slips through, so immunization is key,” says Matemba, also executive director for Health and Rights Education Program (HREP), a local non-governmental organization.

But he says the re-emergence of the case after 30 years in Malawi should remind the government of the need to ensure the health system’s resilience.

He says this resilience can be achieved through adequate funding to the health sector.

“As a country, we need to ensure that our health system is resilient and robust. One way we can make it such is by meeting the Abuja Declaration on Health to allocate at least 15 percent of the national budget to the health sector.

“Twenty-one years after that declaration, we still can’t go fits 10 percent in budget allocation to the health sector. Without sufficient funding, outbreaks of this nature can spiral out of control, and we will struggle to contain other health shocks,” Matemba says.

Since the last case in 1992, Malawi has sustained its polio surveillance through an independent committee of experts that oversees and coordinates the country’s polio monitoring and reporting system.

Learn more about the related issues:

Bookmark or share this with others using some popular social bookmarking web sites:

Link to this page from your site/blog