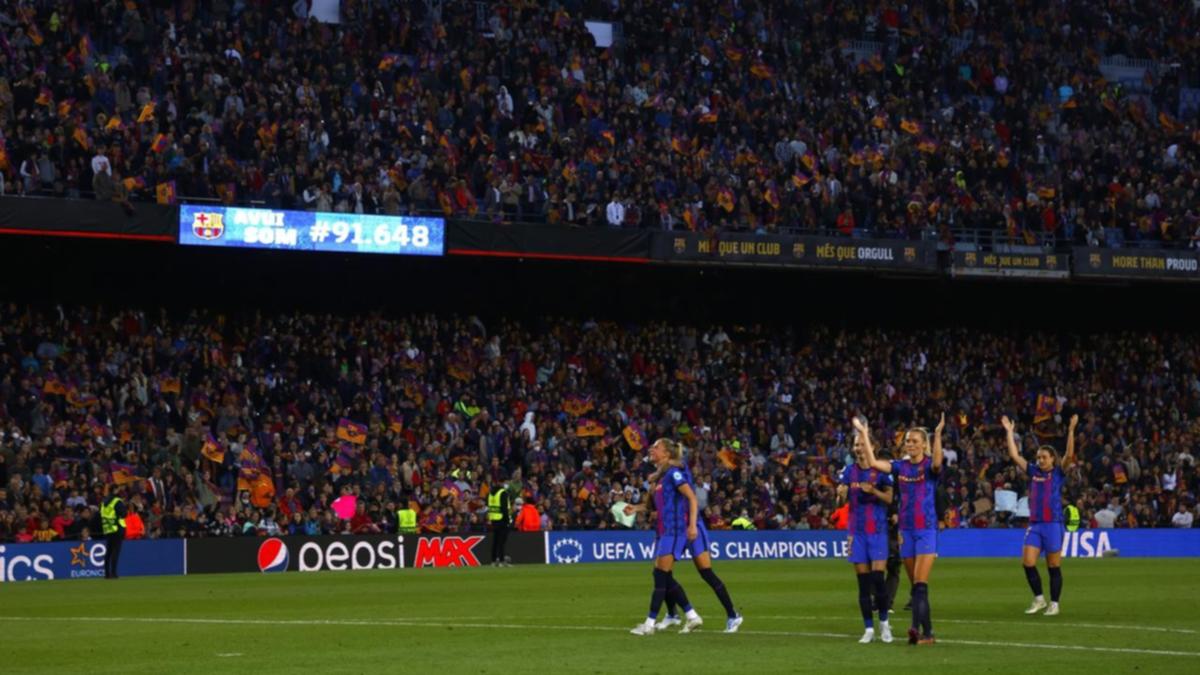 A record 91,648 fans have turned up for a women’s match as Barcelona beat Wolfsburg 5-1 in the first leg of their Women’s Champions League semi-final at the Camp Nou on Friday.

The clash broke the previous women’s attendance record set just three weeks ago when 91,553 spectators flocked to the same venue for Barcelona’s showdown with Real Madrid on March 30.

“It is something spectacular what happened today and almost a month ago, it leaves us speechless,” midfielder Patri Guijarro said about being cheered on by yet another crowd record.

“I think that within days, or even years we will be a little more aware of the magnitude (of what happened), and how special it is to experience a day like this.”

The previously long-standing record for a women’s game was 90,185 for the 1999 Women’s World Cup final between the United States and China at the Rose Bowl.

Barcelona, ​​who reached the Champions League semi-finals with an 8-3 aggregate win over Real, were off to a perfect start as midfielder Aitana Bonmati put them ahead in the third minute.

The hosts doubled their lead seven minutes later when Caroline Hansen netted against her former club with a fine finish into the top left corner, while Jennifer Hermoso and Ballon d’Or winner Alexia Putellas added one goal each to make it 4-0 before break.

Wolfsburg midfielder Jill Roord marked her 25th birthday by scoring for the visitors in the 70th minute, with the goal being confirmed following a VAR review.

But champions Barcelona, ​​in full control since the opening minutes, extended their lead when Putellas converted a penalty in the 84th minute, leaving two-times champions Wolfsburg facing an uphill task in the return leg.

“What the players have done basically (deserves) a 10,” Barcelona manager Jonatan Giraldez said. “Surely the first half is one of the best we have played this season.”

“Today, it was a very good game to show how ambitious we are,” Guijarro said.

“Two years ago we were sent home in the semi-finals against them and today, well, we played this way. There’s still another game left but we’re going to go out there the same way we did today, or even better. “

Lyon will take on Paris Saint-Germain in the other semi-final on Sunday, with both second-leg games to be played on April 30.

Barcelona are seeking to repeat their treble from last season. They have already clinched the Spanish league and are in the Copa de la Reina last four.