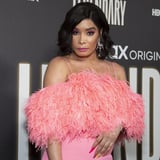 Leiomy Maldonado is a judge on “Legendary,” sitting alongside Megan Thee Stallion, Jameela Jamil, and Law Roach as they search for the best voguing house. Few people are more qualified to judge ballroom than Maldonado, who is often referred to as the “Wonder Woman of Vogue.” The Bronx natively played a critical role in defining New York’s ballroom scene in the early 2000s, creating the “Leiomy Lolly,” which has been incorporated into the routines of many a pop star. She also made history as the first openly transgender performer on MTV’s “America’s Best Dance Crew,” served as the choreographer for “Pose,” and starred in Nike’s #BeTrue ad campaign and a number of other modeling campaigns.

Legendary’s Leiomy Maldonado Explains How You Can Appreciate, Not Appropriate, Ballroom

In the new episode “Chosen Family” from HBO Max Pa’lante and WORD’s initiative “Are You Listening?,” premiering exclusively on POPSUGAR, Maldonado speaks about the process of transitioning in a Latinx family, leaving home to find her chosen family in the LGBTQ+ community, and eventually returning home once again, more comfortable in her own skin. “I had to leave home at a very early age,” Maldonado says. “Not because my family didn’t accept me or respect me, but it was more so that they didn’t understand, and I didn’t understand my own transition. So I left home, and I was able to find the LGBTQ+ community .”

In the ballroom community, Maldonado found people who had gone through similar experiences and could show her the way forward while also honoring and celebrating her. Still, all her success in the ballroom world came with some challenges. “I went through so much in ballroom. I had so much negativity when it came to the competition world,” she says. “It was so bad, ’cause I was so good. But I had to tell myself: do you want to become the pain, or do you want to become the light?”

Watch the episode above, and check out “Chosen Family” on YouTube on June 9.